IB does not care what style of formatting you use as long as everything is done consistently (the same each time) and completely (all necessary information provided to locate sources of information and avoid plagiarism).  MLA formatting is generally used in English, Modern Languages, History, Economics, Business, Art, Music, Film, Theater (sometimes in ESS, Mathematics, ITGS & Computer Science). 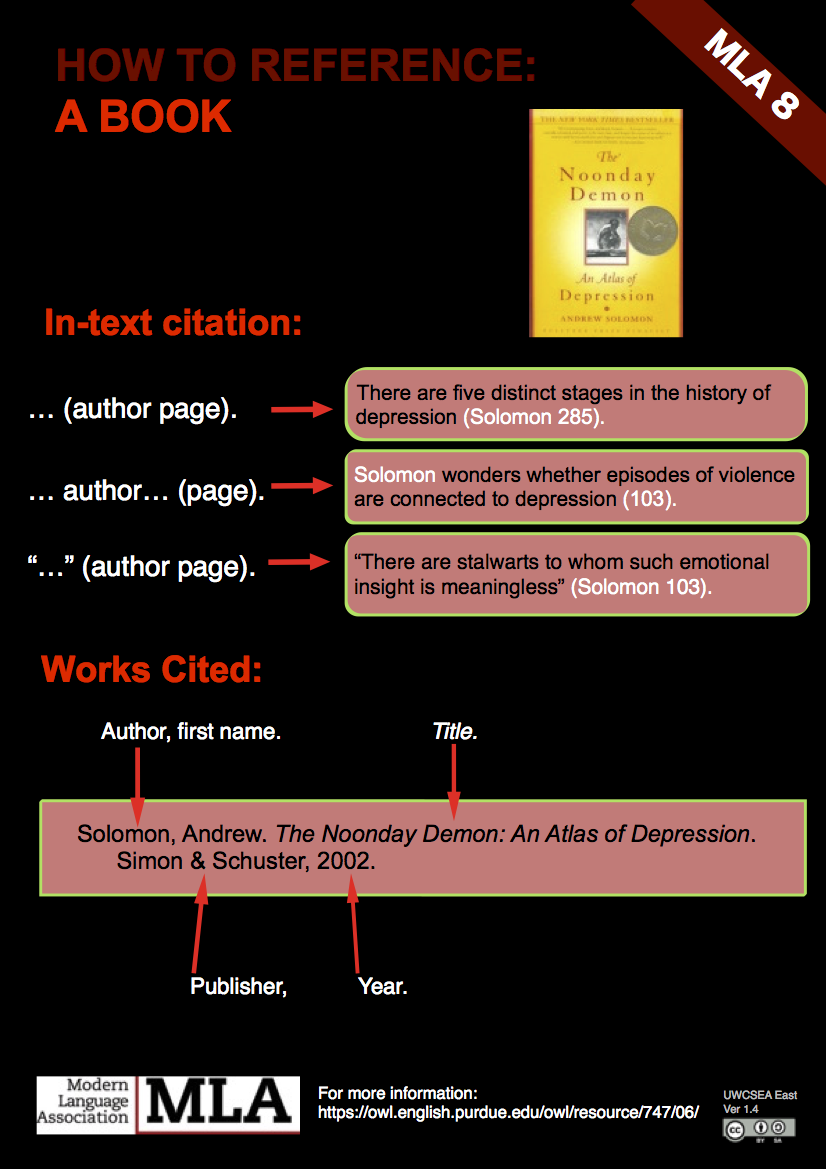 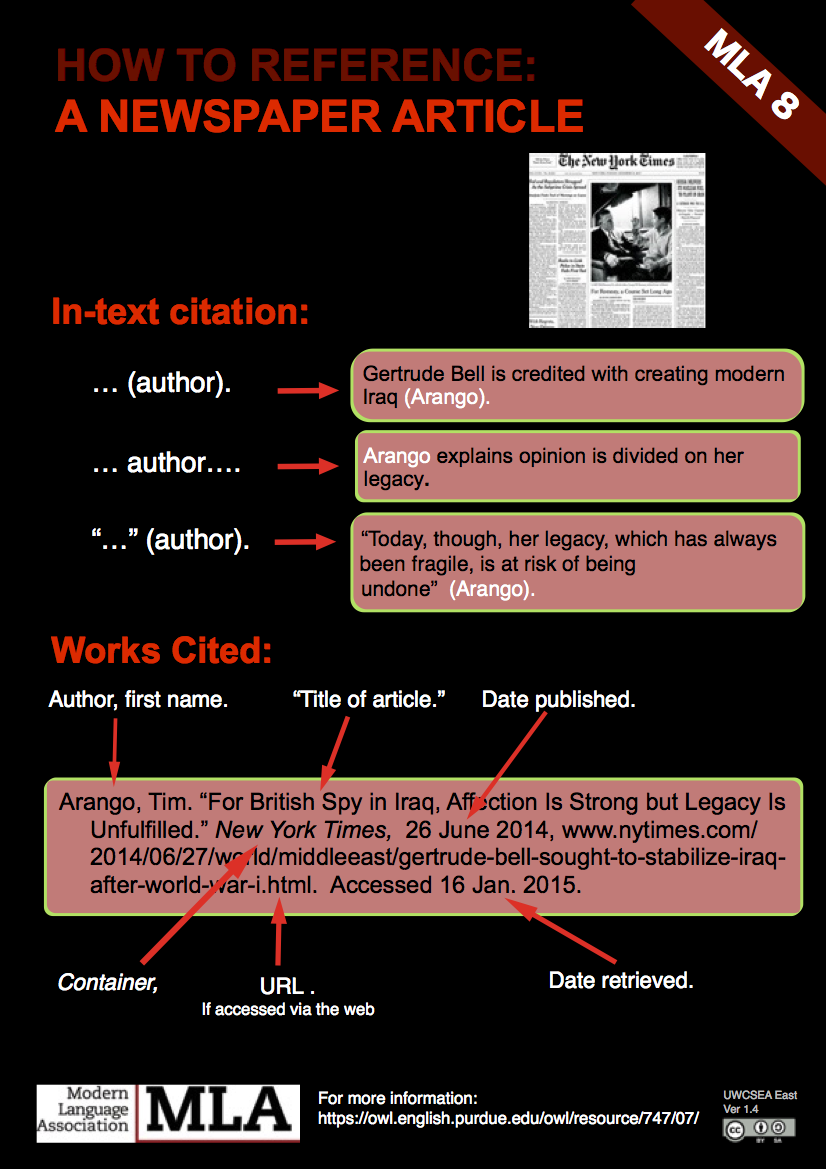 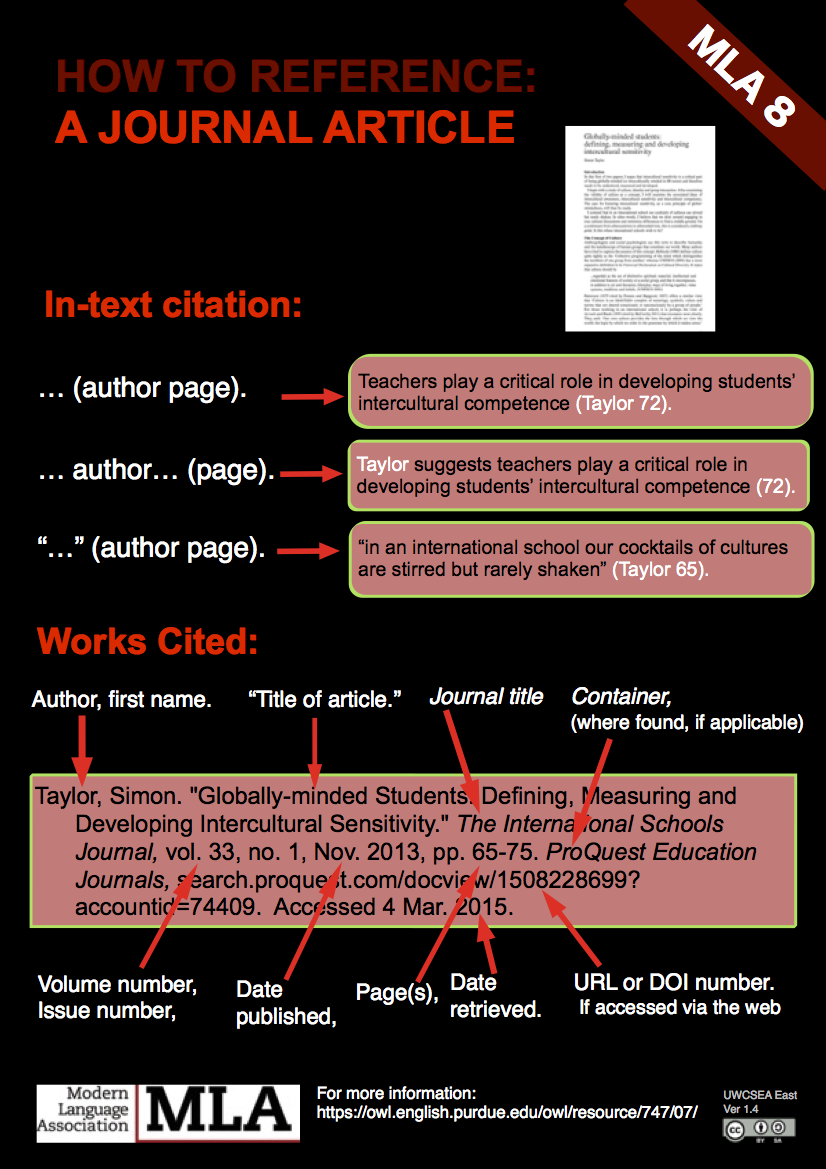 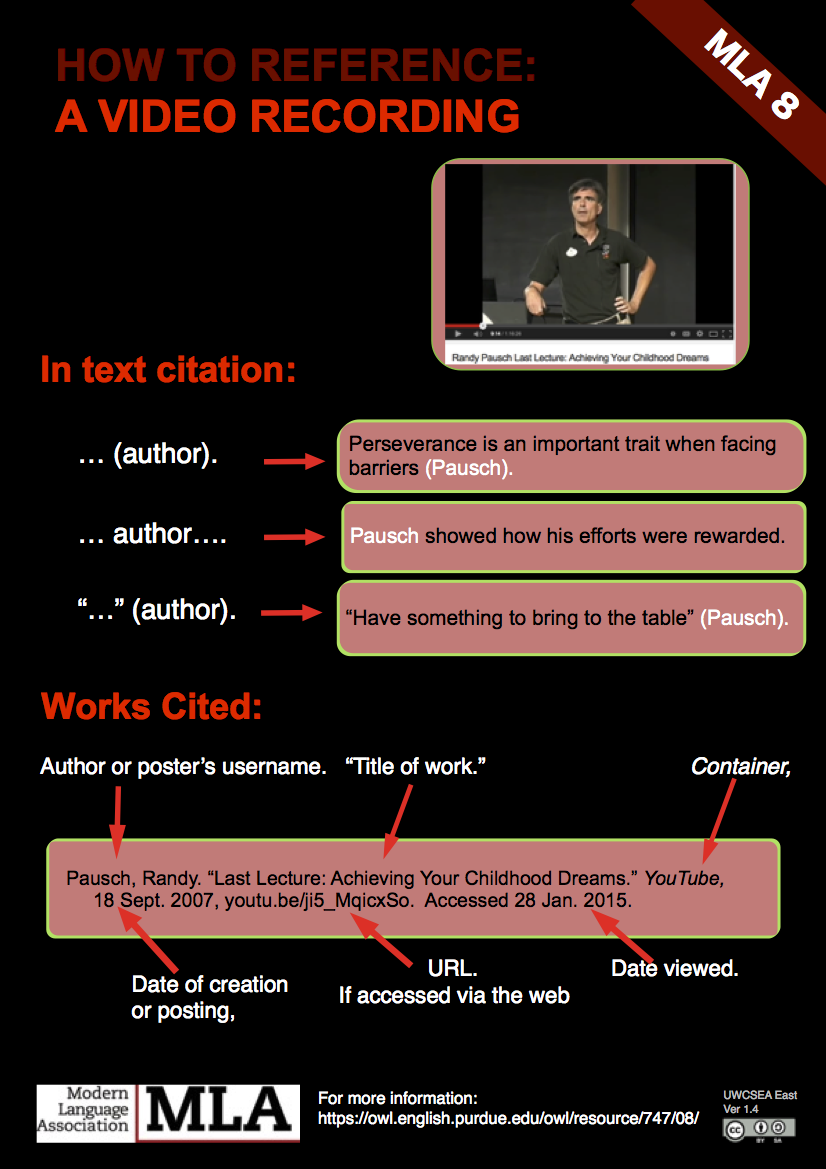 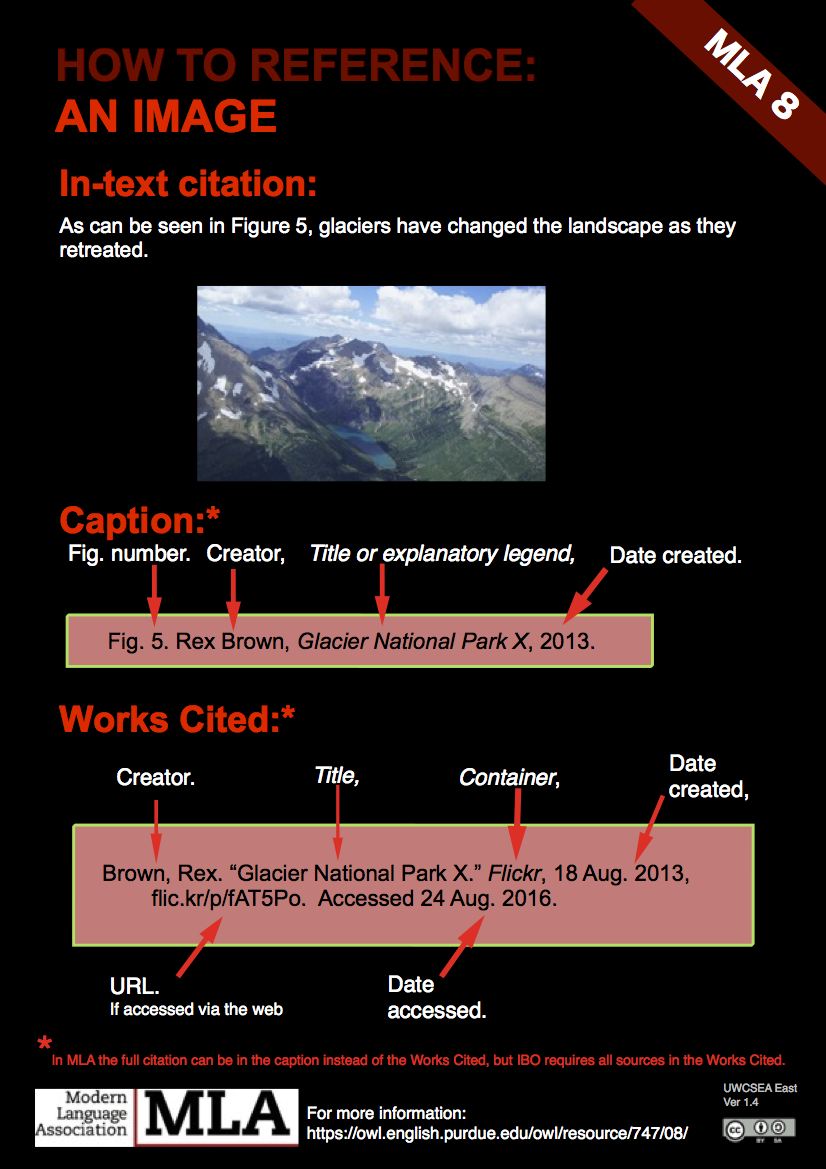 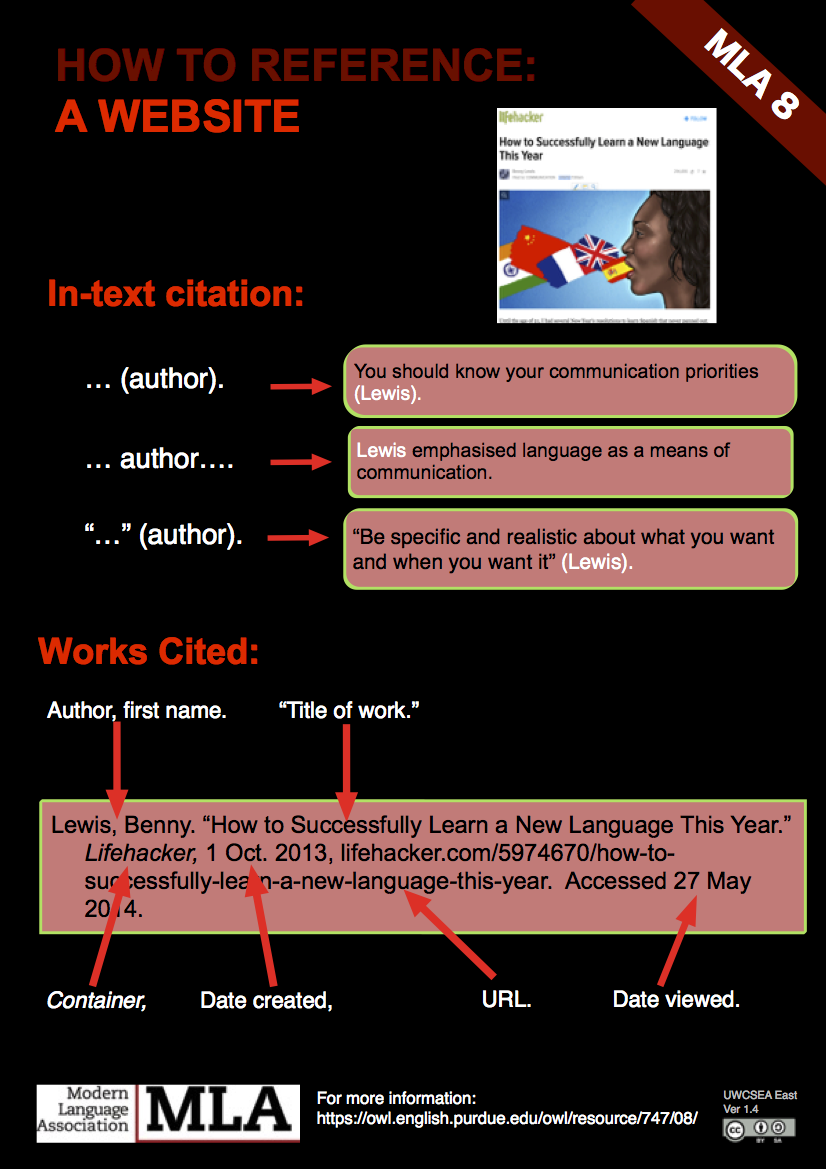 From OWL at Purdue

Sometimes you may have to use an indirect source. An indirect source is a source cited in another source. For such indirect quotations, use "qtd. in" to indicate the source you actually consulted. For example:

Ravitch argues that high schools are pressured to act as "social service centers, and they don't do that well" (qtd. in Weisman 259).

Note that, in most cases, a responsible researcher will attempt to find the original source, rather than citing an indirect source.

From OWL at Purdue

Sometimes more information is necessary to identify the source from which a quotation is taken. For instance, if two or more authors have the same last name, provide both authors' first initials (or even the authors' full name if different authors share initials) in your citation. For example:

Although some medical ethicists claim that cloning will lead to designer children (R. Miller 12), others note that the advantages for medical research outweigh this consideration (A. Miller 46).

Citing a work by multiple authors

For a source with two authors, list the authors’ last names in the text or in the parenthetical citation:

Best and Marcus argue that one should read a text for what it says on its surface, rather than looking for some hidden meaning (9).

The authors claim that surface reading looks at what is “evident, perceptible, apprehensible in texts” (Best and Marcus 9).

For a source with three or more authors, list only the first author’s last name, and replace the additional names with et al.

According to Franck et al., “Current agricultural policies in the U.S. are contributing to the poor health of Americans” (327).

The authors claim that one cause of obesity in the United States is government-funded farm subsidies (Franck et al. 327).

If you cite more than one work by a particular author, include a shortened title for the particular work from which you are quoting to distinguish it from the others. Put short titles of books in italics and short titles of articles in quotation marks.

Lightenor has argued that computers are not useful tools for small children ("Too Soon" 38), though he has acknowledged elsewhere that early exposure to computer games does lead to better small motor skill development in a child's second and third year ("Hand-Eye Development" 17).

Murray states that writing is "a process" that "varies with our thinking style" (Write to Learn 6). Additionally, Murray argues that the purpose of writing is to "carry ideas and information from the mind of one person into the mind of another" (A Writer Teaches Writing 3).

Visual studies, because it is such a new discipline, may be "too easy" (Elkins, "Visual Studies" 63).